DS Lewis in Inspector Morse, and DI Lewis in his own series. A Geordie from the North of England, Lewis must have moved down to Oxford at some point early in his career. He has two children and is married to Valerie Lewis during Inspector Morse.

Lewis is Morse's Sergeant, he is loyal and hard working, but portrayed by a younger man than Colin Dexter first put in his books.

Lewis is a loyal, hardworking, honest, and earnest police detective, who is often troubled or frustrated by the erratic, emotional, and egotistical behaviour of his superior, Morse. The background and personality of Lewis - a working class, easygoing family man with a Geordie accent - is frequently contrasted with that of Morse - Oxford educated, RP-accented, lifetime bachelor. Morse frequently uses these differences to insult or demean Lewis, perhaps from Morse's point of view in a playful manner, but Lewis is often not amused by the jabs. In his frustration, Lewis is often more in step with their joint superior Chief Superintendent Jim Strange, himself an evident supporter of Lewis; however, despite a great respect towards Strange, Lewis is always unflinchingly loyal to Morse and follows his lead.

In Inspector Morse, Lewis is often shown following a hunch that Morse criticises, and in the end Lewis is usually proved correct, or at least more correct than Morse. Near the end of the television series, Lewis moves on in his career and takes a promotion.

Lewis' wife was killed in a hit and run car accident five years before the series started. Lewis moved to British Virgin Islands three years after her death, only to return to Oxford as a DI two years later.

After the Pilot he takes an enthusiastic role with his Sergeant, Hathaway, who seems like another Morse all over again.

Now a widower, Lewis falls more often into the female traps that Morse fell into when he was Lewis' DCI. Even so, Lewis often remains with a more level head than Hathaway and Morse, and does not become as convinced of their innocence even if he has gone to dinner with them.

He also appears to have an attraction to Dr Laura Hobson who is still the forensic pathologist for the police force. He later engages in a romantic relationship with Laura in the second episode of series seven as well as episode three. The pair are shown to be often staying round at each other's houses and in one scene of Intelligent Design are having a chinese together.

Lewis was originally a fresh-faced, happy-go-lucky detective sergeant who was Morse's sidekick. He was often the cheerful one while Morse was the grumpy and sometimes patronizing one. In the books he is originally an older man in his early sixties and Welsh instead of a northern Geordie. This was changed to suit the TV adaptation and even Colin Dexter, the author has said that Kevin Whately's portrayal of Lewis is better than the one he created. Lewis was happily married to his wife Valerie with two young children but this changed after the end of Inspector Morse and in his own spin-off series, Lewis, he looks destined to go the same way as his former boss and go through a series of relationships that were almost certainly not going to work out. Lewis is also older and wiser with a face that looks like its been lived in and appears to be more quieter and vulnerable and a lot sadder. However, he does appear to be more cheerful when long-time pathologist Doctor Laura Hobson is around yet none of them appear to want to admit that they are more than just friends and collegues. Yet Lewis is clearly a lot more cheerful in series seven when he and Hobson finally get it together.

At the time of Morse, Lewis was a Detective Sergeant was often referred by Morse as either "Lewis" or Lewis' police rank; "Sergeant".

James Strange was both Lewis and Morse's boss in the Morse Series.

DC Gray is Lewis' temporary sidekick who appears for only the series seven episode, The Ramblin' Boy. He is clearly green and inexperienced and Innocent pairs them up together while Hathaway is away. Lewis appears less than pleased about being saddled with another bagman and Inncoent tells him to be nice to Gray. Lewis replies that if Morse had been nice, he'd have still been a sergeant. Innocent replies that Morse has a lot to answer for.

Lewis first met Hathaway when he arrived back from the Virgin Islands. Hathaway eventually becomes Lewis' new DS, and ended up solving many crimes together in and around Oxford. Hathaway was already a DS assigned to DI Charles Knox. Lewis already knew Knox when he was a segeant. But Knox was put on immediate suspension after taking a breathalyzer test. From then onwards, Hathaway becomes Lewis' sidekick.

Lewis first met Dr Laura Hobson in the 1995 episode, The Way Through the Woods, in which she arrives to take Dr Russel's place as pathologist. Both of them are much younger and there's a chance that both of them would have been suited to one another had Lewis not still been married at the time. They maintained a close, professional working relationship from the start although no doubt none of them had any idea that they would one end up getting together. After the death of Morse, Lewis' wife Val dies and his children fly the nest, leaving the detective pretty much on his own. He spends two years in the British Vergin Islands training police and he arrives back to find that the Oxfordshire Police has changed considerably since his departure. His new boss, Jean Innocent is quite happy enough to send him on a police training course and for him to pass on his knowledge to younger police cadets and seemed to think that Lewis wasn't much good anymore. Hobson is still there and hasn't appeared to have done much in terms of career move and she appears to provide some comfort to Lewis who is still grieving for his wife, Val, killed in a hit-and-run accident. The case remains unsolved until series three. It is Hathaway who finds out who actually killed Val in the accident. It is mainly until series four that they are forced to admit that there may be some added attraction between them and this continues right up until the very end, when in series seven, they get together in the episode, The Ramblin' Boy, originally split into two parts. Before that in series six, Lewis had to tend with DI Alan Peterson, who is considerably younger than him. Hathaway points out that Peterson will be Chief Constable one day and Lewis comments that he'll be retired by then. Alan asked Laura out to dinner in the last episode of series six, only for her to reveal to Lewis that Peterson is not her type of man. This implies that the pair still have feelings for one another. In series four's Your Sudden Death Question, Lewis and Hobson attempt to have a weekend away to an opera concert but these plans are interrupted by the murder of one of the quiz team members at Chaucer College. In Falling Darkness, Lewis and Hathaway end up rescuing her from being buried alive after it was revealed that two twins had been put up for adoption and they ended up believing Laura was the mother. In the final episode of series seven and potential final episode, Lewis and Hobson are shown to be in a romantic relationship and are seen having dinner together in the second of the two parter, Intelligent Design. In the opening scenes of Intelligent Design, Lewis is seen trying to roast a chicken and Hathaway is giving him advice on the phone. In the first episode of that two parter, Lewis reveals to Laura that he is considering retirement and she thinks that it is about time. The pair nearly kiss and are interrupted. Lewis is adjusting to being in a relationship with Laura after all these years of will-they-won't they? but admits it is a good strange. 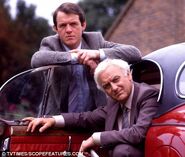 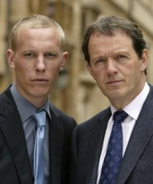 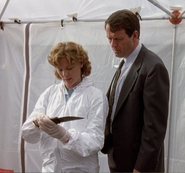 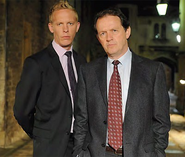 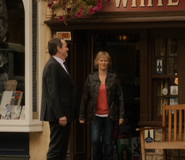 Add a photo to this gallery
Retrieved from "https://crimedrama.fandom.com/wiki/Robbie_Lewis?oldid=5086"
Community content is available under CC-BY-SA unless otherwise noted.